From time to time I have people come in my store and ask if I have any books about “Miss Hatties.”  I don’t because there wasn’t a Miss Hatties.  So, I did some research of my own, and prepared the article below about the real bordello that was two blocks down the street from the mythical “Miss “Hatties.”

Most of the stories that are told today about the fictional “Miss Hattie’s” were borrowed from tales originally told about a whorehouse that actually did exist two blocks down the street at 110 West Concho. It was owned by Cynthia Malone who was born in Kaufman County, Texas, in 1875, and came to San Angelo in 1909, set up shop and operated for several decades as a successful madam on Concho Avenue. During that time, she accumulated a wealthy estate, which included ranching and commercial properties in and around San Angelo. She died in 1953, and is buried at Fairmount Cemetery (Block 75A, Lot 10).  Her nickname -- “Honey”-- is engraved under her real name on the tombstone.  (She was also reported to have used a working alias, Grace Hallaway (sometimes spelled ‘Holloway’).* This name was listed at 110 W. Concho in the San Angelo City Directories of  1915-16, 1918, and 1925. In 1949 through 1952, the occupant is listed as Cynthia Malone.) 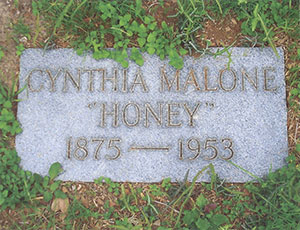 Her relatives, who inherited the estate, came here from Kansas after she passed away, and still reap the benefits of those assets. Her old two-story house – the real bordello --was eventually purchased in 1956 and moved to its present location at 602 Elm Street at the westbound service road of Houston Harte Freeway, just across the freeway from Central High School.  It’s a two-story bed-and-breakfast property that faces west – you can’t miss it. It was the real bordello of Concho Avenue. [See photo below.]

About Miss Hattie’s:  Ross McSwain once wrote in his weekly “Out Yonder” column: “I find it interesting that San Angelo’s claim to fame is a whorehouse that never really existed.”  He was referring to the myth of Miss Hattie’s, a fiction that was created back in the 1980s by Evelyn Hill, who owned an antique store where Legend Jewelers is now located.  Ms. Hill had an empty upstairs that she wanted to do something with, so she rounded up antique furnishing and other items to create a fictional bordello.  (This writer owned a used furniture store at the time, and even sold and delivered to Ms. Hill some old metal bed springs found in an old estate on Bowie Street in north San Angelo. I believe those bedsprings are still there in the “museum.” Also, in 1953, I worked at the Roxy Theater located next door at 22 E. Concho--where Joyce Wilde is now.  There was no whorehouse or rumor of one when I worked there!)   Ms. Hill charged a fee to view the “museum” and made up some stories to go along with it, even hired some local girls to dress the part and re-enact as ‘Ladies of the Night” in gaudy attire.

Ms. Hill also created the story about there being a tunnel from the bank to the bordello. Although there have been claims that evidence of a tunnel was found, no one has shown actual proof of a tunnel--probably a basement, or cellar.  Look at it logically – what banker in his right mind would allow underground access to his bank from an illegal business operated and patronized by criminals?  But, if that’s not enough, there’s this: The bank left it’s location on Concho Street (where Miss Hattie’s restaurant is) in 1903—the building where the supposed ‘bordello’ was located wasn’t built until the winter of 1910/11.* There were no tunnels.  The so-called tunnel found at the Jesse Rose Building was most likely a ‘liquor locker’ for hiding illegal potables during Prohibition of the 1920s.*

(*This information came to me from Suzanne Campbell, director of the West Texas Collection at ASU.)

A few samples of the occupants of 18 and 18 ½ E. Concho in the San Angelo City Directories show these listings: [18 ½ E. Concho is the present location of the ‘museum.’]

The bank at the location where Miss Hattie’s Restaurant is currently located moved from that building in 1903.  According to the San Angelo City Directories from its beginnings in 1908, there was never another bank located there, or in that block.

THE REAL BORDELLO OF CONCHO AVENUE 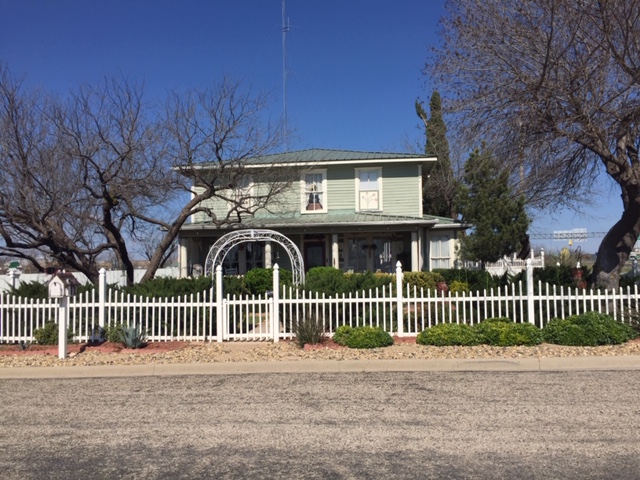 PS: In 1953 I worked at the Roxy Theater (where J. Wilde’s is located now) which is next door to 18-1/2 E. Concho, the museum building. There was no whorehouse there, or hint of one ever being there. Believe me, I would have known if there was!

Some pals and I did, on occasion, talk to the working girls at 110 West Concho through a back window—we never went inside, of course, just teased back and forth with the girls. We were young pre-teens at the time, about 11 or 12-years old.