SCROLL DOWN THIS PAGE FOR A LIST OF NEW READING SUGGESTIONS! 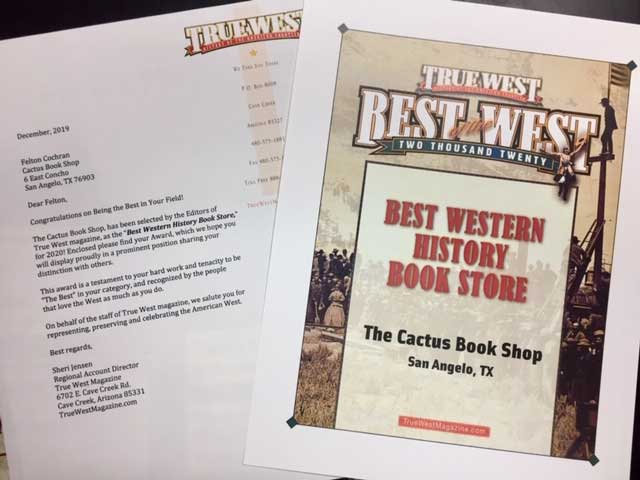 A note of introduction from the proprietor, Felton Cochran:

In 2019, my store was featured on Bob and Kelly Phillips' "Texas Country Reporter."  It is repeated from time to time on the RFD Channel. Also, in January, 2020, Cactus Book Shop was honored by the national publication, True West Magazine as "Best Western History Book Store." I was quite proud of both of these honors.

If you're ever in San Angelo, please stop and visit. My hours are 10:00am to 5:00 pm Monday through Saturday. I accept major credit cards, and I’m happy to take your out-of-town checks with proper identification.

I've been a serious bookseller since 1995. (Before that, I was a serious book collector for many years.) When you visit my shop, you will find an ever-changing inventory of Texana and Western Americana -- floor-to-ceiling, and wall-to-wall. I’m particularly proud of my Texas County and Regional History section which takes up over 70 linear feet of shelving! I also offer large selections devoted to Range and Cattle; Texas Rangers; lawmen and outlaws;  Frontier Military and Forts; The Texas Revolution and the Republic of Texas; Spanish Exploration and Influences in Texas; The Mexican Revolution; Westerner biographies. And there’s a sizable section of fiction by Texas and Southwest authors. And there's so much more…leather-bound classic literature, children's classics, etc.

CACTUS BOOK SHOP is located in the heart of San Angelo’s downtown historical district at 4 East Concho Avenue. You can call me at 325-659-3788, or contact me via e-mail at cactusbooks@suddenlinkmail.com . Or just come on by--I think you'll be glad you did.

If you can't get out this way, then you might want to sign up for my monthly Texana Catalog.  It's easy, and it's FREE! Scroll down this page for the catalog request form. Thank you!

Here are some recently published books that might help you through the stay-at-home days of boredom……..10% off all titles listed and free shipping ($22.00 minimum order)!

1) Abbott, E.C. “Teddy Blue” WE POINTED THEM NORTH: Recollections of a Cowpuncher 1991, Lakeside Press edition, Chicago.  Edited and with a historical introduction by Ron Tyler Adams,  Ramon Adams,  SIX-GUNS: “This is one of the best books in recent years depicting cowboy life.  The author was a well-known character of his day.” Includes a chapter on cowboy songs.  385pp w/photos, footnotes, index.  Trade paperback, new…….19.95

4) Bernard, Lora-Marie THE YELLOW ROSE OF THEXAS: The Song, The Legend and Emily D. West 2020, 1st printing, Charleston.  The author seeks an honest account honoring the grit and determination that brought a free black woman from the abolitionist riots of Connecticut to the thick of a bloody Texas revolution. 160pp w/illus. Trade Paperback, new….23.99

5b) Castaneda, Chrysta & Loren C. Steffy THE LAST TRIAL OF T. BOONE PICKENS 2020, 1st edition, Stoney Creek Publishing.  “A high-stakes courtroom drama told through the eyes of Castañeda. It’s the story of an American business legend still fighting in the twilight of his long career, and the lawyer determined to help him make one final stand for justice.”303pp w/notes, sources, index. HB/DJ, new [multiple copies available]…….34.95

9) Gwynne, S.C. HYMNS OF THE REPUBLIC: The Story of the Final Year of the American Civil War 2019, 1st edition, NY.  A compelling narrative that breathes new life into the epic battle between Lee and Grant; the advent of 180,000 black soldiers in the Union army; William Tecumseh Sherman’s March to the Sea; the ri   se of Clara Barton; the election of 1864 (which Lincoln nearly lost); the wild and violent guerrilla war in Missouri; and the dramatic final events of the war, including the surrender at Appomattox and the murder of Abraham Lincoln. 416pp w/illus, index. HB/DJ, new. Recommended!........32.00

10) Gwynne, S. C.  EMPIRE OF THE SUMMER MOON: Quanah Parker and the Rise and Fall of the Comanches 2010, reprint, NY.  “A thrilling account of the Texas frontier in the 19th century, a vivid description of the Comanche nation, …” 371pp w/notes, bibliography, index. Trade paperback, new …..18.00

11) Gwynne, S.C. REBEL YELL: The Violence, Passion, and Redemption of Stonewall Jackson  2014, 1st edition, NY. “A thrilling account of how Confederate General Thomas “Stonewall” Jackson became a great and tragic American hero.” Gives insight into his tragic personal life and traces his brilliant two-year career in the Civil War.  His death caused both the North and South to grieve the loss of a remarkable American champion. 672pp w/map, illus, biblio, appendix, index.

13) Haley, J. Evetts CHARLES GOODNIGHT: Cowman and Plainsman 1949,  facsimile reprint, Norman. Illustrations by H.D. Bugbee. One of the best of the cowmen’s biographies.  Much of Haley’s material came from first-hand interviews with Goodnight over a period of years.  485pp w/bibliography, index. Trade paperback, new…..24.95

15) Kavanagh, Thomas W. THE COMANCHES: A History, 1706-1875 1999, 1st paperback printing, Lincoln. “This is the first in-depth historical study of Comanche social and political groups. [Kavanagh] traces the changes and continuities in Comanche politics from their earliest interactions with Europeans to their settlement on a reservation in present-day Oklahoma.” 585pp w/maps, illustrations, tables, notes, references, index. Softcover w/pictorial cover, new………34.95

We also have all 72 titles of Hank the Cowdog by John Ericson—entertaining! Call us for options on these highly entertaining books for young and old, paperbacks = $5.99 each, 1 thru 72.

For the youngsters in your household,  click on “CHILDREN’S CLASSICS” for some great titles that have entertained generations.

1) Adams, John A., Jr. THE FIGHTIN’ AGGIE DEFENDERS OF BATAAN & CORRIGADOR 2016, 1st edition, College Station. “Provides a new and compelling exploration of these pivotal events by recounting the history of Bataan and Corregidor through the eyes of 89 soldiers and officers who were former students and citizen soldiers from the Texas A & M. All were products of the Corps of Cadets, and indeed no other institution could boast of such a large deployment in the opening of the war.” 291pp w/maps, photos, notes, bibliography, index. HB/DJ, new…………30.00

3) [BIG BEND] YONDERINGS: Trails and Memories of the Big Bend by Ben H. English. 2017, 1st edition, Fort Worth. The author grew up in the Big Bend area and looks back on his younger days of exploring the beauty and uniqueness of this remote part of Texas. 223pp w/photos. Trade paperback, new [multiple copies available]…..22.95

4) Boessenecker, John TEXAS RANGER: The Epic Life of Frank Hamer, The Man Who Killed Bonnie and Clyde 2016, 1st edition, NY. Hamer stood on the front lines of some of the most important and exciting periods of American history. He participated in the Bandit War of 1915, survived the climactic gunfight of a West Texas blood feud, battled the spillover from the Mexican Revolution, protected innocents from the Ku Klux Clan, and ran down gangsters, bootleggers, and Communists. 514pp w/photos, notes, index. Trade paperback…..21.99

7) Dana, Anna Manns  UNDER THE TEXAS SUN: Adventures of a Young Cowpuncher  1986, 1st edition, Fort Worth. The memoirs of Mac Vernon recount the true-to-life adventures of a teenager who grew to manhood working on a West Texas ranch in the 1880s. Includes tales of branding cows, recovering stolen stock and witnessing a murder over a four-bit monte game. 97pp. HB/DJ, fine copy……22.50

9) Edwards, Dr. Charlie UP TO MY ARMPITS: Adventures of a West Texas Veterinarian  2002, reprint, Marathon.  A cow-doctor’s entertaining memoirs of a practice that spanned fifty years and covered a 200 mile radius around Marfa, Texas. 349pp w/photos, map, illustrations. Entertaining! Softcover, as new…..19.95

11) Freeman, Huey WHO SHOT NICK IVIE? 2019, 1st edition, Urbana. Border Patrol Agent Nick Ivie was killed by drug smugglers along the Arizona-Mexico Border in 2012. President Obama vowed to bring his killers to justice, but when the shooting was connected to the government’s Fast and Furious gunrunning scandal, the FBI’s investigation suddenly ended. Freeman has uncovered the true story of what occurred—a story that has never been told before. 355pp w/maps, illus, index. Trade paper..24.95

13) Kelton, Elmer THE MAN WHO RODE MIDNIGHT  reprint edition, TCU Press. Of all Kelton’s novels, this title ranks as one of my personal favorites. Trade paperback….19.95

16) Lehmann, Herman NINE YEARS AMONG THE INDIANS 1870-1879: The Story of the Captivity and Life of a Texan Among the Indians  reprint edition, Austin. Edited by J. Marvin Hunter.  The story of Herman Lehmann who was a captive of the Comanches and Apaches. 235pp w/illus. Trade paperback….24.95

18) Michno, Gregory THE SETTLER’S WAR: The Struggle for the Texas Frontier in the 1860s  2011, 1st edition, Caldwell.  “In the 1860s, the targets of the Comanches, Kiowas and Apaches were usually the homesteaders on the Texas frontier. The majority of killings were done by Indians on unsuspecting white families. But their story is seldom told—a tale of white victims is not a popular one today.” This book does a great job of recounting that era’s violence, revealing 150 Indian depredations most historians chose to overlook. 448pp w/maps, illustrations, notes, bibliography, index. Trade paperback, new…..19.95

19) Michno, Gregory & Susan  A FATE WORSE THAN DEATH: Indian Captives in the West, 1830-1885 2009, 1st edition, Caldwell. “This book is the most extensive collection ever assembled of what it was like to be an Indian captive in the west.” It contains graphic descriptions of what happened to the victims, and provides profiles of them before they were captured, how they became prisoners, how they survived, and the effects those events had on the remainder of their lives.  Many of the grim events chronicled were in Texas and the Great Plains. 527pp w/photos, maps, appendices, bib, index. Trade paperback….19.95

We also have all 74 titles of Hank the Cowdog by John Ericson—entertaining! Call us for options on these highly entertaining books for young and old, paperbacks = $5.99 each, 1 thru 74. If you need a list of titles, email.

For the youngsters in your household, look at our website and click on “CHILDREN’S CLASSICS” for  over 60 titles that have entertained generations.

Here is a list of ELMER KELTON titles.  I have most of them in either hardback or paperback, and in first edition or reprints.  Call or email with the titles you’re interested in and we’ll see what I have.  (If you’ve read all of Elmer’s works, I can tell you from personal experience, reading his books again are just as enjoyable as the first time! I’m re-reading The Man Who Rode Midnight at this moment…..)

(*First editions of these titles were paperback originals)

1992  LIVING AND WRITING IN WEST TEXAS

2007  SANDHILLS BOY: The Winding Trail of a Texas Writer 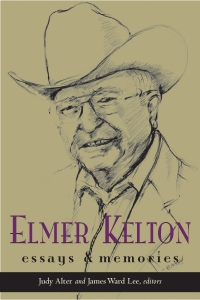 Announcing a special new edition of what has been Elmer Kelton’s most elusive book,

LIVING AND WRITING IN WEST TEXAS

This new 2010 edition, limited to 190 copies, and bound in gold lined cloth, includes the original introduction by Al Lowman, two speeches by Kelton, plus a bonus of four never-before-published illustrations by Tom Lea which were not included in the original edition…………... $125.00 [Several years ago I purchased all the publisher's inventory, and only have a few copies left!]

Sandhills Boy:
The Winding Trail of a Texas Writer
$35.00 hardback